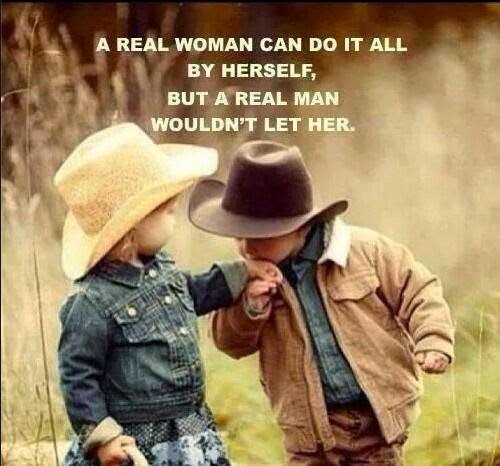 I saw this and just about barfed. Partly because the kids are being so sweet in the picture. I'm a sucker for munchkins. They're just so darn curious and sensitive and loving.

And partly because the number of twists in this meme are literally breaking bones in my body. Hand this message to a man in a wheel chair and watch the light bulbs in his brain explode. Hand it to a woman who has been abused by a man. Won't let me? Who are you to tell me you won't LET me? Hand this meme to someone who is one variety of non-gender conforming or another. Sheesh.

Cultural messages like this are the reason I'm wearing a skirt (today its the kilt again...the mancub has a band concert). The idea that there is a "real man" or a "real woman" is...

I'm at a loss for words. Not a good place to be when writing a blog. Mom's voice is popping up now, reminding me that if I don't have anything nice to say, don't say anything at all. All I've got is swearing when I hear the concept of "real man" or "real woman." Yep. That's pretty much it.

These terms are broken for two reasons. One, the binary gender system is a joke. Seriously. A cruel joke played on us by marketing execs. Think about it. Why did facebook want the binary gender system embedded in their profiles so badly that you couldn't have a page without it once the company started to monetize? Simple. The first piece of demographics that companies want when they pay for marketing is gender. This reality is slowly changing (even facebook started allowing other options), but between big money and religious fervor, the binary gender system is entrenched deeply in our society. Who benefits? Big money, and big power. Some would argue that all men benefit from it, and while there are certainly benefits, this entire skirt project is about uncovering the traps of that privilege.

The second reason the terms "real men" and "real women" are broken is that they put forward the notion that the complex web of the human reality can be simplified into a penis and a vagina and a couple behaviors that go with them. Just for the record, while typing, I accidentally misspelled "real men" as "real mean." Freudian much?

Seriously. How long did it take us just to map the human genome? And these jokers still want us to believe that we can be divided down the middle by a genital identification and a set of 2-3 behaviors.

Not really sure how this one concludes. Do I think chivalry should die? Not even close. I intend to extend kindness to everyone I come across every day, regardless of their gender performance. But I also need to be able to receive it, so that others have a chance to give. That's the challenge of the human condition. Sometimes giving is receiving. Sometimes receiving is giving. And some folks do nothing but one or the other. And it all has to be ok.

So bugger off with the "real man," "real woman" crap. I'm going to go watch a few Swiffer commercials. At least there I might see a man caring for his family in a way that feels familiar to my reality...
Posted by Royce at 3:08 PM